From the user’s perspective, we contribute to the effective use of social assets.
We consider it our mission to construct civil engineering structures, the basis of social capital, that can continue to fulfill their functions over several generations. This involves numerous issues including safety, functionality, and environmental friendliness, and there are strong demands related to each of these areas. Over many years, we have contributed to numerous major projects embodying this important mission, always using the latest technology together with efficient and reliable construction techniques.

Completion of a large-scale rock-filled dam 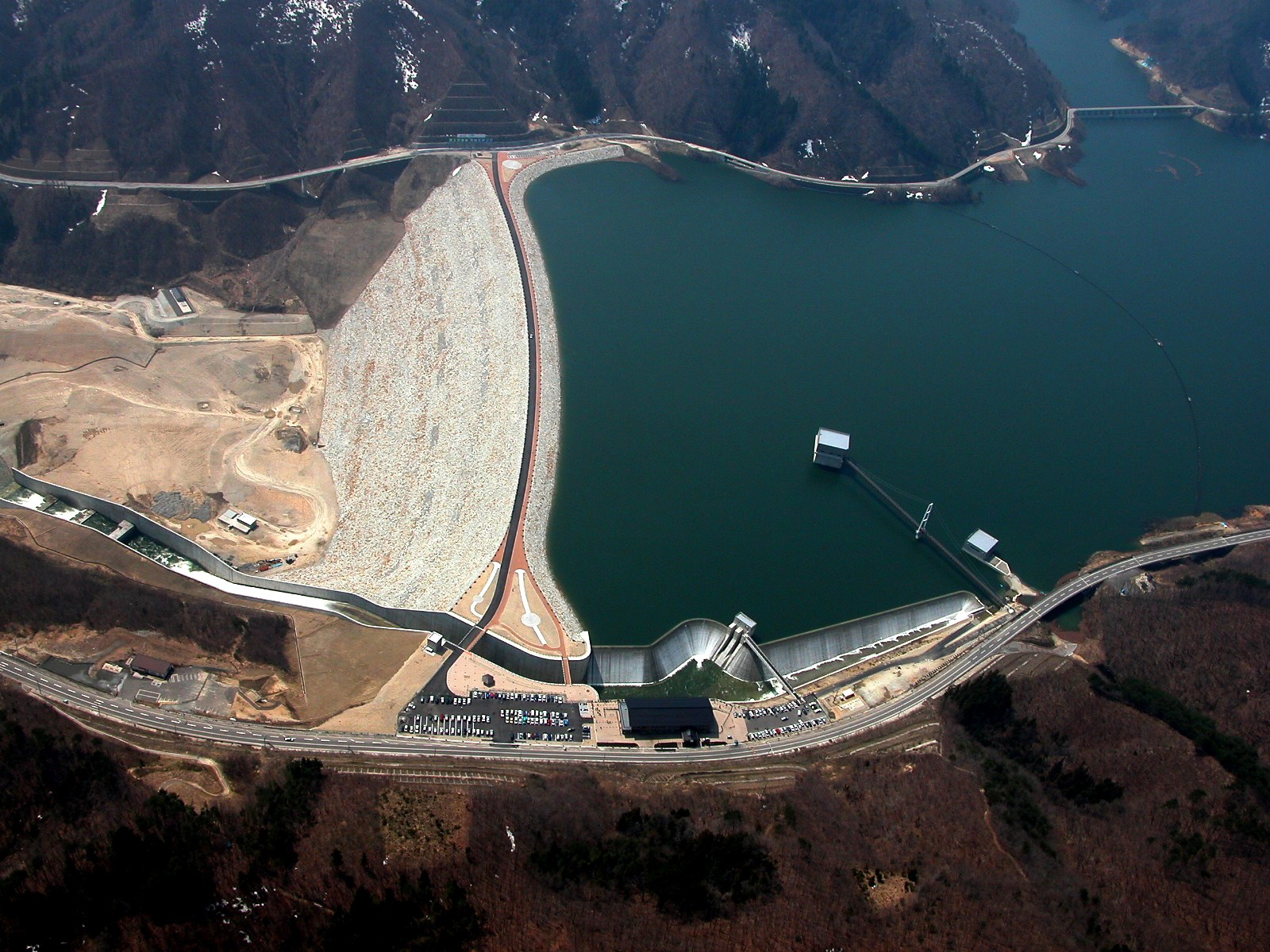 The Surikamigawa dam (Fukushima City) is a multipurpose dam - flood control, river flow maintenance, city and industrial water supply, and power generation; the bank of the dam is 105 meters high and 718.6 meters wide, with a volume of 8.4 million cubic meters, making it one of the largest core rock-filled dams in Japan. Construction was started in December 1994, and after the foundation laying ceremony was held in September 1999, full-scale filling operations were launched. The main body of the dam was completed in July 2002, and a trial filling of the reservoir was completed in June 2005. 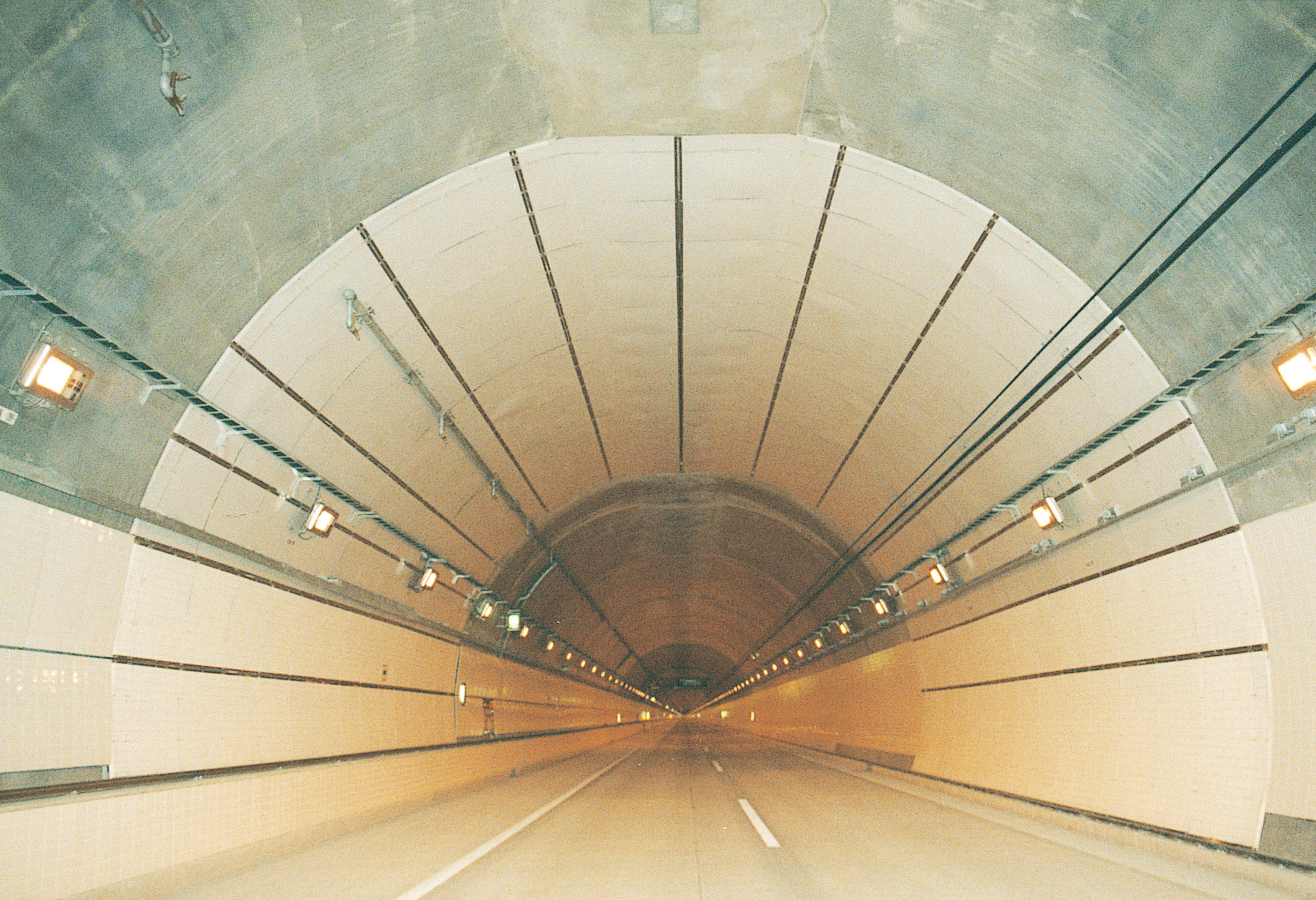 The pilot tunnel of the Hida Tunnel is 10.7 km in length with a maximum overburden of 1,000 meters. Pilot tunnels play a crucial role by enabling pre-excavation geological surveys. They also serve as an outlet for underground water prior to excavation of the main tunnel. Over the 10-year period of construction, we encountered a wide variety of obstacles - unstable ground conditions, a large, high-pressure water inflow, and so on - and were forced to repeatedly stop operation of the tunnel boring machines and excavate the surrounding earth before resuming operations.
Fortunately, by the use of our leading edge technology, we were able to overcome these difficulties and complete a feat of tunnel construction that will go down in the annals of Japanese civil engineering. 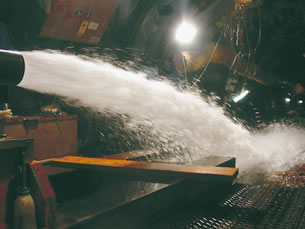 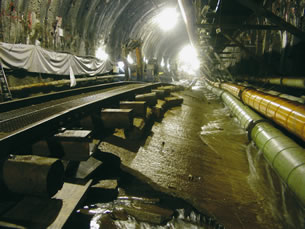 The Metropolitan Expressway Central Loop is an 11-kilometer-long car-only road that runs under the heart of Tokyo. Tobishima is responsible for the 760 meter (1,520 in both directions) section running from the Nishi Shinjuku shaft in front of the Tokyo Opera City to the Hon-machi rotating shaft at Hon-machi 3-chome, Shibuya-ku. Construction employs a large-diameter slurry shield (exterior diameter of the shield machine is 11.56m) and streamlined construction method, which utilizes rotating shield revolution method employing a ball slider, zero-loss method that simultaneously does tunneling and segment assembly, and semi-prefab synthetic PC floor panels (“docks”). Construction work is in progress, and the aim is to open the loop to traffic in 2008. 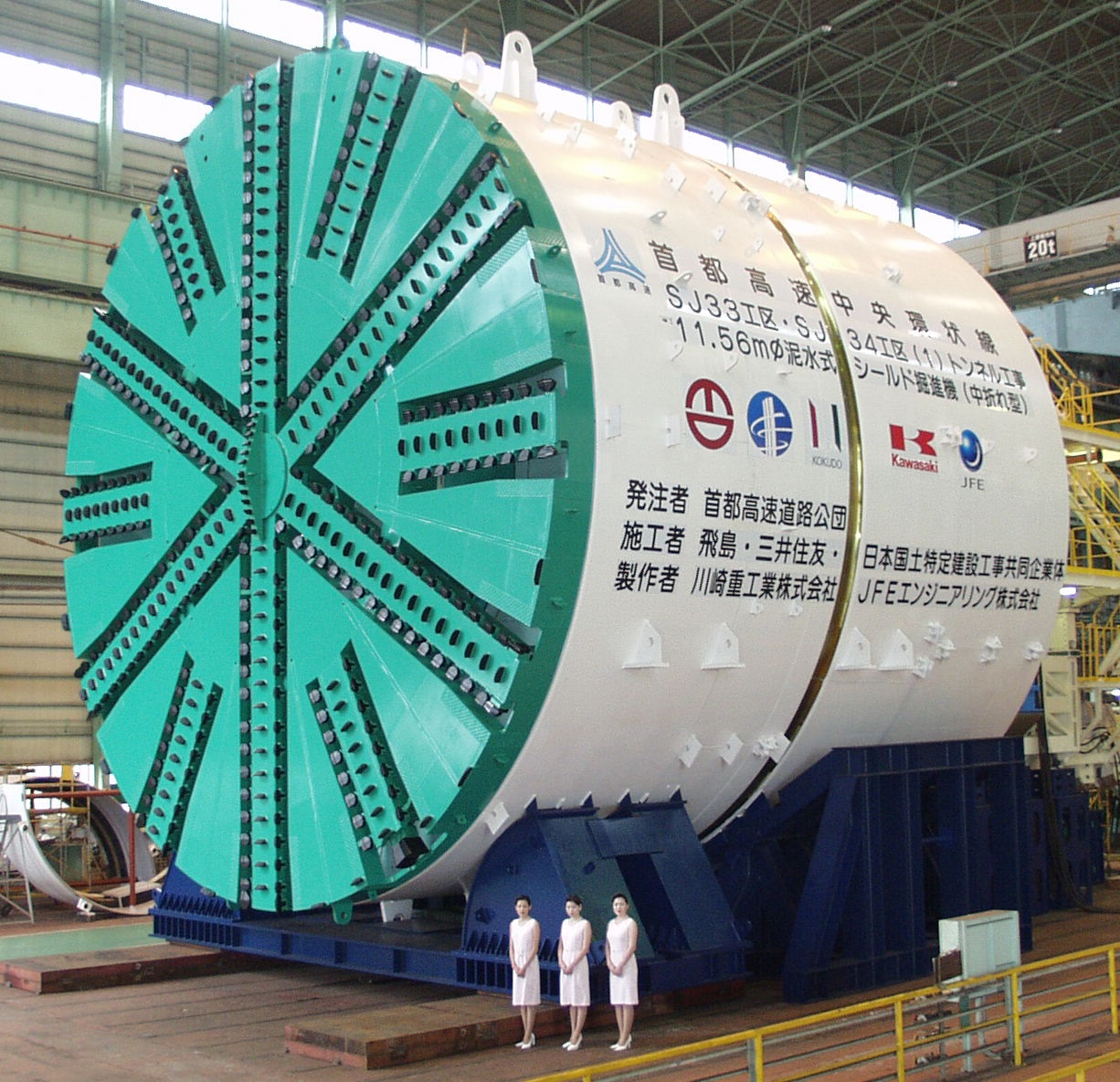 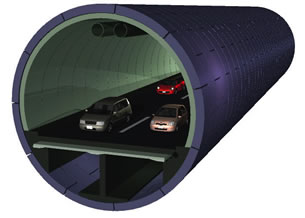 The village of Tsumagoi in Gunma Prefecture is located in a countryside area noted for its lush greenery and its “highland” vegetables. In the construction of the 300-meter-long Kumano Ohashi Bridge (see photo at left), we employed our proprietary “long traveler” method, which makes it possible to construct long sections in a single process, dramatically reducing both construction time and labor. In the construction of the approximately 140-meter-long Nakatomamu Mugawabashi Bridge over the Cross-Hokkaido Expressway (see photo at right), we employed the cantilever method for the PC box-girder bridge with corrugated steel webs. 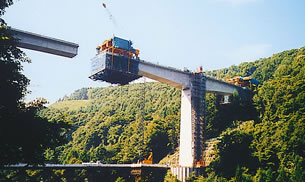 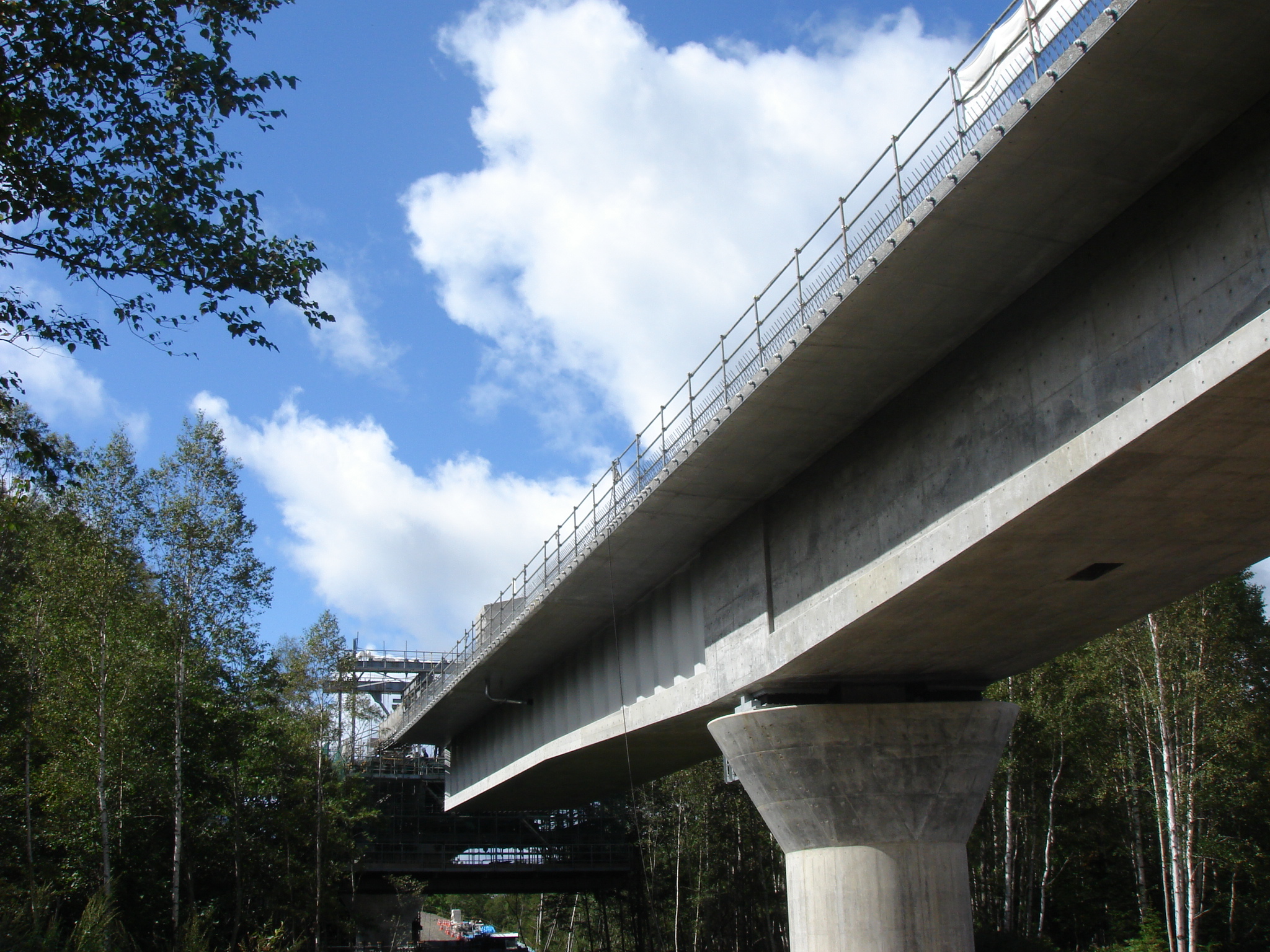 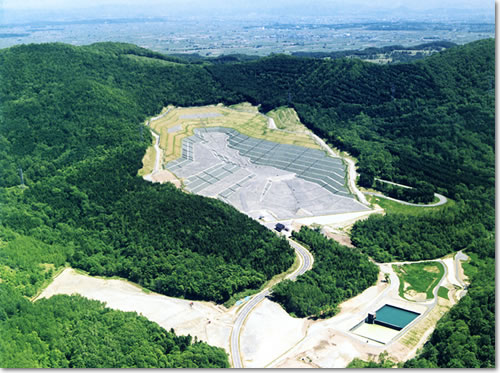 A construction consortium, including business representatives, local residents, and contractors, was formed, and a high-quality large-scale waste disposal facility was built after thorough discussions and with the use of advanced technology. The concept behind the project was “protect, not contaminate, underground water,” and the site incorporates thorough risk management based on a “failsafe design,” a triple-component composite liner, and multiple monitoring systems. The Company received the 2003 Outstanding Civil Engineering Achievement Award (Group 1) for the appraisal of the integration of these advanced technologies and regional communities.

With growing concerns about environmental problems and efforts are being made to reduce and reuse the various byproducts produced during construction, at the Nikko River Nishi Nakano Drainage Pump Station, Tobishima has developed the “E3 (Ecology Economy Evaluation) System,” an inexpensive technology to improve the quality of sludge (equivalent to between a type 2 to 4 processed soil) by adding and mixing materials such as a solidification agent, of which the main material is industrial byproducts such as fly ash and macromolecular aggregations from construction sludge. This is a zero-emission production method that produces useful products from both the materials that are to be disposed of and disposable materials. 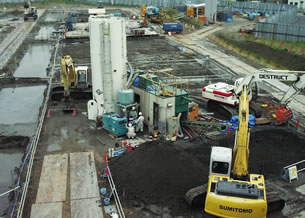 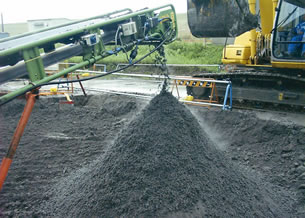 Tobishima's E3 System (E3 stands for: Ecology, Economy, Evaluation) is a sludge solidification and stabilization technology utilizing a mobile device for granular solidification. It is used to efficiently and continuously process sludge produced by the construction process, by mixing it with solidification agents (principally industrial waste such as fly ash) and macromolecular coagulation agents. This technology allows the production of material of the required quality, principally for use in road paving. By coupling the device with a continuous mixer, the process can be operated continuously, cutting costs dramatically. This is a recycling technology that meets the needs of today’s environment-conscious society for the practice of the “waste hierarchy” (reduce, reuse and recycle) wherever possible, bringing us closer to the Holy Grail of “zero emission.” 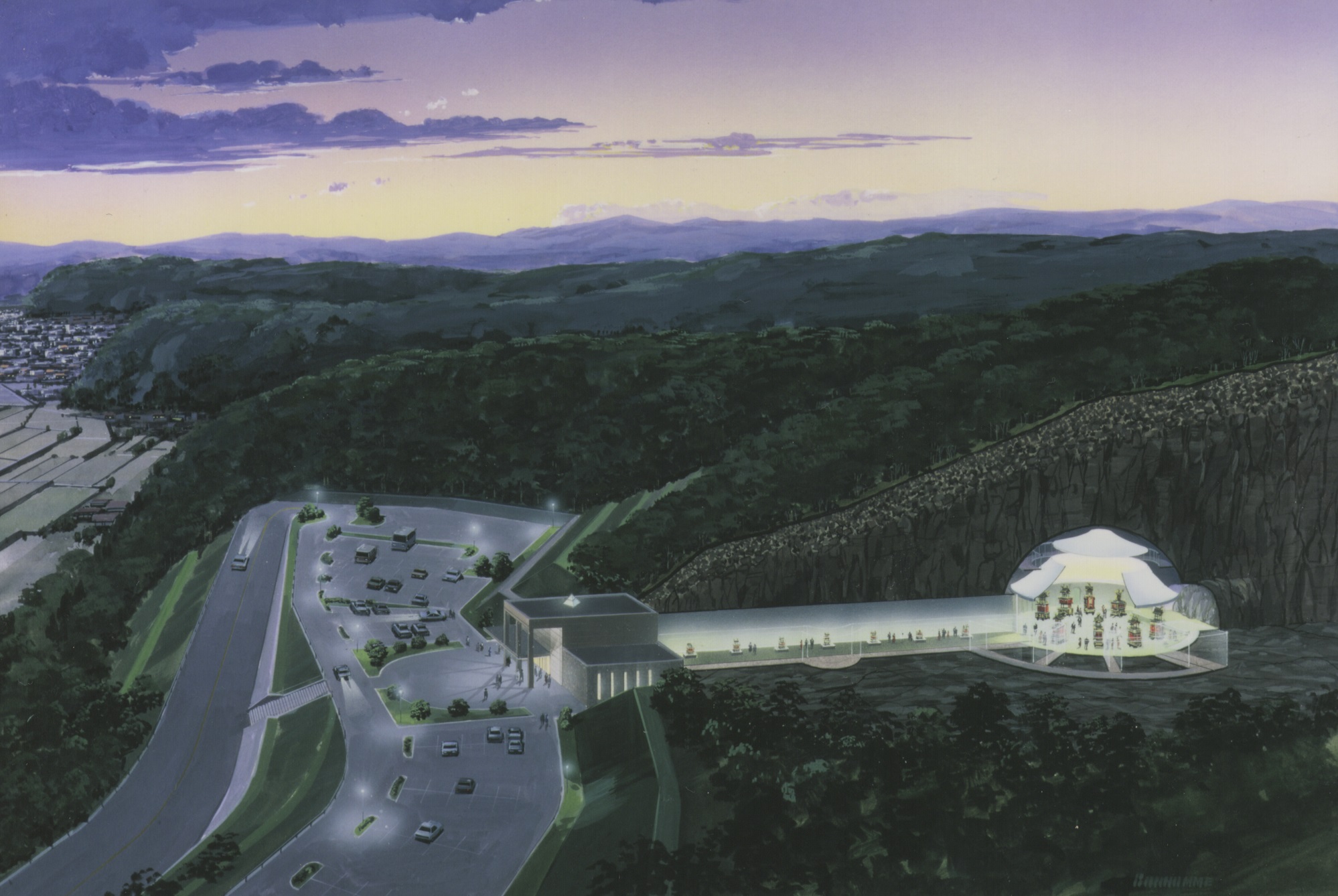 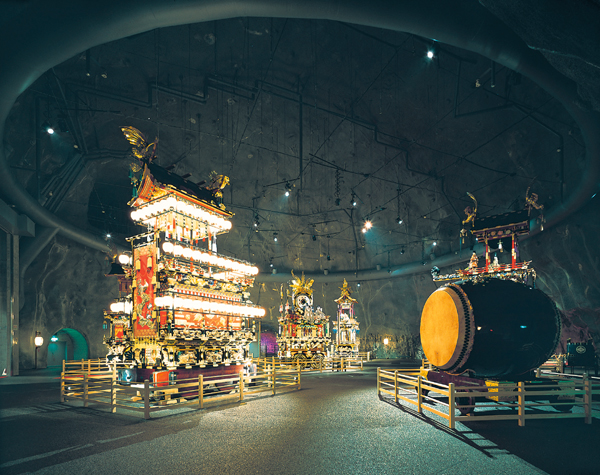 The foundation of the Yabe River Bridge was constructed using the Pneumatic Caisson Method. The foundation is around 50 meters deep ― the deepest in Japan. Therefore, construction was conducted remotely from the surface using centralized control since the interior of the operating room was at 5 atmospheres of pressure. In addition, when workers needed to enter for such work as inspections, they used a helium-mixed breathing system to ensure safety.